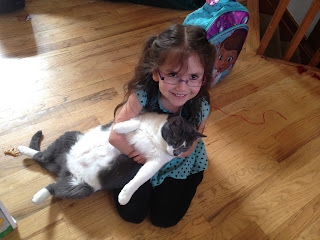 I don’t understand why someone put a cat in a bag and why humans get mad when you let the cat out of the bag. That’s just mean, why would you want to put a cat in the bag? It’s dark inside bags and certainly not comfortable. However, that is not as bad as claiming that a cat took your tongue. Now that’s just gross! Why would a cat take a human tongue? That is certainly not something I would want to play with and it can’t lap up milk so it’s not even useful.

I realize that I’ve only been alive for 3 years, but I have never seen it rain cats and dogs. Did it rain cats and dogs in the past? I would think there would be cats everywhere if they were just falling from the sky. Is that how I got here? Maybe if it rains cats and dogs again we could keep one, a cat that is, not another stupid dog, I could really use someone around here that I could have an intellectual conversation with.

However, the most disturbing thing I’ve heard and it even gives me shivers to mention it, but who in the world is going around skinning cats? Exactly how many ways are there to skin a cat? And why would you want to skin a cat? That’s just horrible! I wouldn’t wish that on the dumbest dog. I guess all humans are cruel but at least mine just dress me funny and trap me in hampers, it could be worse.
Welcome to my not so purr-fect life.

Oh yeah, don't forget to check out my featured videos of superior cats and dumb dogs! Stupid humans will be coming soon.
Posted by Unknown at 7:46 AM

Email ThisBlogThis!Share to TwitterShare to FacebookShare to Pinterest
Labels: animal abuse, cat, cat got your tongue, cat idioms, cat out of the bag, cat stories, Smo

Are you a cat or dog person?